All the hoopla about Rep. Anthony Weiner has gotten people (and the media) talking about infidelity and asking themselves “Is Sexting the New Infidelity in the Online Era?”  There are numerous articles right now discussing whether sexting even IS infidelity or not, whether it is infidelity to have cybersex, or whether emotional affairs are even real!  Yet with all this talk with so-called “experts” spouting psychobabble opinions, one MAJOR thing is missed.  Why are we talking about infidelity like this: “How far can I go?  What is the boundary so that I can push the limits and then quote this or that ‘expert’ and claim that it not an affair”?  When we got married, we made a vow to forsake all others until death parted us, so rather than look at it asking for the maximum you can do before it’s cheating, I challenge you (the reader) to look at it from a new point of view and ask “What is faithfulness?  What do I do to be 100% faithful to my spouse?”

Fidelity, according to the American Heritage dictionary, is:

Of course it doesn’t help that they use the word “faithfulness” in the definition–but we could further say that faithfulness is “devotion to a person or duties: allegiance , constancy , fealty , loyalty.”  In other words, fidelity would be “the state of loyalty and devotion to obligations, duties, and observances that are owed to a certain person (namely your spouse).

In addition, there are several Bible verses that can help us get a grasp on what faithfulness means:

Psalm 26:3
for I have always been mindful of your unfailing love and have lived in reliance on your faithfulness

Psalm 89:2
I will declare that your love stands firm forever, that you have established your faithfulness in heaven itself.

Psalm 117:2
For great is his love toward us, and the faithfulness of the LORD endures forever. Praise the LORD.

I realize these are all Old Testament references but I think we can get the concept: namely that faithfulness is following through with a commitment regardless of difficulty.  It is over a long time, and it is based on a conscious decision to BE loyal and devoted to a promise.  If we are married people, the promise we would be loyal and devoted to is our marriage vows.

Soooo most marriage vows do promise the “…forsaking all others” part in there somewhere as well as the “…as long as we both shall live” part.  Most marriage vows I know of do not say something like “…forsaking all others until I get bored or until someone more interesting comes along” nor do they say “…as long as you continue to have sex whether I’m romantic or not.”  Thus fidelity is a DECISION.  Like love, it is a choice you make and then act on.  You CHOOSE to be faithful.  And to make it easy, I have a 2-second definition of faithfulness that you can memorize:

Giving 100% of your affection and loyalty to only your spouse.

So rather than asking if it is cheating to have a guy or girl “friend” on Facebook, ask yourself this:  Are you more loyal to keeping that friend then you are to your spouse?  Then it’s infidelity.  And rather than asking if sexting is an affair, ask yourself this: When I’m sexting am I giving 100% of my affection to my spouse or am I sharing at least some of it with someone else?  When I’m sexting am I giving 100% of my sexual loyalty to my spouse?  If not, then it’s infidelity! 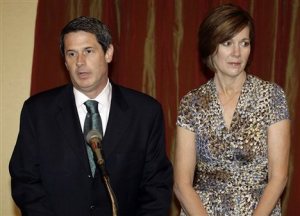 With the latest “Twitter” (literally) online and in the blogosphere about the Rep. Anthony Weiner sexting scandal, the media is in a frenzy about what he’s done, whether he should resign, whether he will remain married, and whether there should be an ethics investigation.  I’ll leave that shark tank alone and let the pundits and politico’s duke it out while I roll my eyes, but one part of this scandal that stood out to me was that when Rep. Weiner did his press conference to “fess up” his wife did not stand by his side.  With a long line of political wives that “took the heat” and stood by their man while he confessed to unfaithfulness, her absence sparked a question that I thought was worth addressing:

When the disloyal spouse confesses, should the loyal spouse stand by as a show of support?

For most of us, we will not have to give a public press conference for media when we confess that our marriage was affected by adultery.  Political wives in the past have had to stand there, before the press,  and act like the supportive spouse when probably what they wanted to do was make it all go away!  More and more, though, political wives are not even attending the “confessional press conference”–instead letting their disloyal spouse face the music alone.   Although most of us aren’t public figures, when our marriages are affected by infidelity, I still  suspect for most it would be more like confessing to parents, siblings, pastor, folks at church, or adult children.  For some disloyal spouses, admitting that what they did was wrong can be VERY hard AT ALL–even in private.  Thus, whether it’s in front of family members or a mob of shark-frenzied media who smell blood in the water, admitting your indiscretions can be tough!

1 John 1:9 tells us that “If we confess our sins, he is faithful and just and will forgive us our sins and purify us from all unrighteousness” so I do know that before ANYTHING, the disloyal spouse should confess to God and make sure that relationship is restored.   When David was confronted about his adultery with Bathsheba, his confession to God was recorded in Psalm 51.   After repenting before God, the disloyal should next talk to their spouse and repair that covenant.   Luke 17:3-4 tells us “Pay attention to yourselves! If your brother sins, rebuke him, and if he repents, forgive him, and if he sins against you seven times in the day, and turns to you seven times, saying, ‘I repent,’ you must forgive him” so I would say that if a disloyal truly turns 180 degrees from what they’ve been doing to live a new life, that it would please God if the loyal spouse made the choice to forgive.  However, Matthew 19:7-9 says  “I say to you, whoever divorces his wife, except for sexual immorality, and marries another, commits adultery; and whoever marries her who is divorced commits adultery.”  Thus one thing that I think many disloyals forget is that their actions broke the covenant–at that point the loyal is 100% morally free to choose to end the marriage (the disloyal is not free to do so).  If they were to get what they merit–it would be a divorce!!  So if a loyal does choose to forgive, it is a gift!

Finally this leads to our question today–should a loyal spouse “stand by” their disloyal when the time comes for them to confess?  Before I even go one step further, I want to note that this applies whether the loyal spouse is wife or husband…whether the disloyal is male or female.  To be honest, I can understand why many of today’s political spouses no longer make the morbid “stand by your man” appearance when they do their confessional press conferences.  As a public  official, the civil servant has both a public life and a private life–and although they may have worked it out privately, a press conference is about the public life.  Furthermore, what the officeholder did privately was HIS/HER choice–why should their spouse have to be on public display?  It is reasonable for politicos to accept personal responsibility on their own.

Frankly I think that goes in private too.  Whether the disloyal spouse is a public personage or not, they made the choices that lead up to acting unfaithfully, and it is their responsibility to take personal responsibility for their choices.  BUT  if a loyal spouse does choose to “stand by their man” (so to speak) it is a gift of amazing magnitude that can often go a long way toward mending the marriage and uniting the two spouses–so they are on the same team and working together.  The Bible has no clear command, but we are told to act more and more and more like Christ, and He forgave those who wronged Him even as He died on the cross.  Who are we to offer less when we ourselves were so unworthy?